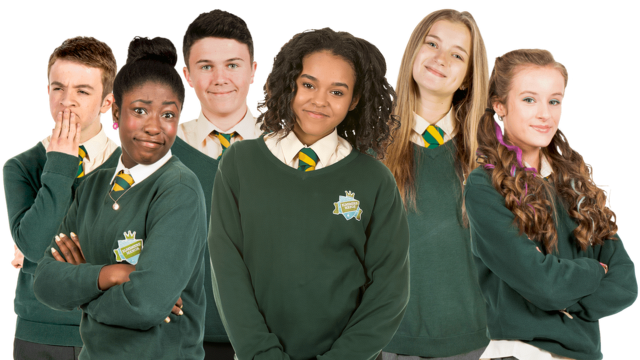 Welcome to the 4 O'Clock Club Wikia

Where d'you go when you know nobody can
understand you?
When it's just too much to handle.

13 January 2012 – 21 April 2020
4 O'Clock Club Wiki is a fan made website which aims to be able to provide its visitors with detailed information on all the different aspects of the 2012 CBBC Television series, 4 O'Clock Club, including character pages, episodes, locations etc. Since this site is made by the fans of the show, this means that any visitor is free to edit the wiki.

Josh Carter runs things. At 13 years-old, he is master of all he surveys - particularly his school, the run-down Elmsbury High. His art of manipulating everyone and everything on school grounds is second only to his desire to become a rap superstar.

But Josh's perfect world soon comes crumbling down. Ten years ago, another Carter named Nathan walked out of Elmsbury High in disgrace having spent his entire time as a pupil creating mischief of the highest order. Funnily enough, his art of manipulating everyone and everything on school grounds was second only to his desire to become a rap superstar. Now he's washed up. He's hit rock bottom. In fact - lower than rock bottom: he's training to be a teacher.

The first series centres on Josh Carter (Khalil Madovi), a pupil at Elmsbury High, and his older brother Nathan (Doc Brown), who works as a teacher there. Josh is portrayed as a laid-back teenage schoolboy trying to maintain his cool reputation, while also being rebellious and trying to cause trouble in order to achieve his goals and humiliate or outsmart Nathan. Nathan, former Elmsbury High student and famous rapper, soon learns that only he will able to stop Josh from his schemes.

In the second series, Nathan leaves Elmsbury and new music teacher Dexter Harris (Jason Callender) joins the school. Dexter becomes Josh and his mother's new lodger, taking Josh's room as a result. As such, Josh antagonizes Dexter through much of the series, until he finally accepts his presence and labels him as an "honorary Carter brother". The series also featured Crispin Bell (Simon Lowe) as the new headmaster, who replaces Byron, and proved to be far stricter than Byron. Mr Thorne was a brutal enemy of Josh and Dexter for the remainder of the series.

The third series featured Nathan's proposal and marriage to Melanie Poppy (Laura Aikman), who both departed the series, and Josh is forced to share his room with his annoying younger cousin, Nero (Akai Osei). When the school burns down due to an issue with candles, Elmsbury is merged with another school, Fowlmere Manor, renaming the school Elmsmere Manor High as of the fourth episode of the third series. Molly and Ryan do not appear in the rest of the series and attend a new school off screen. Due to the merger, several new characters joined the series in episode three - these were PE teacher Mr Nunn (Dan Wright), Miss Parkwood (Sophia Di Martino) and pupils in Nero's year; Eli Grant (Daniel Kerr), Owen Garland (Lewis Brindley), Fleur Murphy (Chloe Davison) and Eleesha Rahad (Grace McIntosh). Sally Ann Matthews also joined the cast as head teacher Aine O'Brien.

The fourth series features Nero, now in the main role, and his crew have replaced Josh and the Elmsbury gang who have all temporarily departed the series (except Isaac, who becomes Elmsmere's caretaker) and Dexter is trying to make it as an accomplished teacher, but is given the new job of taking care of Nero's shenanigans, which indirectly resembles Josh and Nathan's relationship in the first series. The teachers who appeared in series 3, Miss Parkwood and Aine O'Brien do not appear in this series, leading to the re-introduction of former head teacher Anita Andress (Liz Hume-Dawson). The series also introduced a new main character, rebellious and cynical tomboy Clem Burton (Jade Alleyne), who joins Nero's crew as well as mysterious spray paintings of Andress appear around Elmsmere, called 'The Phantom Sprayer', however it was later revealed that it was Mr. Bell who was the criminal. A new love interest for Dexter, Science teacher Lizzie Baker (Sarah Schoenbeck), is introduced in episode one. A new recurring character, Isobel Harlow (Ruby Barnhill) appears from episode three. This series also features mini cameos from Josh's gang as shown in the series premiere and series finale. Nathan also makes his comeback in two episodes and is now a father to baby Moses.

In the fifth series, all the characters from the fourth series remain, but with three new characters, Lizzie's younger sister Amber (Ella Marshall Pinder) and her friends Violet (Cara Jenkins) and Darnesh (Riley McCormick) who want to fit in with the "cool" kids, like Nero and his gang. Zoe-Marie's younger sister Ingrid (Zara Thurstan) also starts at the school and quickly becomes Amber's enemy. A new head teacher is also introduced in the first episode, Mrs Helena Goodman (Victoria Carling). Throughout the series, both Nero and Clem try to tell each other how they feel about each other. Dexter and Lizzie are dating but must hide it from others, though Mr Nunn (Dan Wright) tries to hit on Lizzie. Amber, and her gang try to beat their bully Ingrid and Dexter and Nero face problems living together.

In the sixth series, Nero and Clem have finally begun dating after their summer romance, but eventually break up after their several arguments. Clem departs in episode three to pursue a career in music. Dexter and Lizzie are expecting a baby, and eventually give birth to twins named Albert and Faraday. After his divorce in the previous series, and a brief relationship with newcomer Anastasia (Rachel Elizabeth Kelly), Bell finds himself living in a run-down caravan on the school grounds with his estranged son CJ (Rufus T King-Dabbs), a newcomer to the series. Dexter and Nero are both shocked at CJ's arrival, as Bell never mentioned in any previous series that he had a child. The series also introduces the characters of Polly Morgan (Mischa Eckersley), a fellow pupil of Nero's whom he tries to impress throughout the series and Owen's younger brother Chester (Rohan Green). In Series 6, Isobel Harlow was promoted to a series regular as she appeared in every episode.

A seventh series has been commissioned and will start airing 24 January 2018. All the main cast from Series 6 will return.The series starts with a rap called " A Brand New Start." The episode is called Boxes. Polly will be singing a solo with the choir but unfortunately for her, Nero is the newest member. In the second episode titled " Film" Nero will be making a film to celebrate the school but his real plan is to make himself famous. Polly fails to retake her geography test which results with her getting in trouble with Mr Nunn.

Community content is available under CC-BY-SA unless otherwise noted.
Advertisement